‘By My Side’ was released to Celebrate 60 years of Cruse Bereavement Care and features soprano Joanna Forest. The single went straight to the top of the iTunes Classical charts when it was released. All proceeds from the single will go to the charity.

Olga Thomas has had a lifelong admiration and passion for the Royal family and has been for many years a supporter of Cruse Bereavement Care, a charity she holds very dear to her heart. She has spent a lot of time, energy and creative musical craftsmanship on behalf of the charity. Some years ago, Cruse began a unique music programme, a tradition to give their patron, Her Majesty The Queen special gifts of music composed by Olga to commemorate the important events in the life of the Royal Household.

‘By My Side’ was recorded in London at The Old Hit Factory along with a live orchestra and produced by Fabio D’Andrea. The featured soloist for the track is Number One Classical album soprano, Joanna Forest. The lyrics were written by Adrian Warwick and Grahame Maclean

Joanna’s tender and pure tone gave stunning results when paired with Olga’s timeless score. It’s another number one for this successful duo and the second time their collaboration has seen them go to number one in the charts. Their previous release ‘Royal Platinum Love Song which also featured Joanna and tenor Daniel Koek also smashed straight to the top of the charts.

Over the years Olga has written many musical pieces for Cruse including Cruse’s anthem ‘Restoring Hope’ and several of her pieces have been presented to Her Majesty the Queen. These include ‘Themes of Life and Glory’, a tribute to The Queen Mother, ‘Celebration’, an orchestral piece written to mark the marriage of The Duke and Duchess of Cambridge. Olga also wrote the anthem ‘Jubilation’ for the Diamond Jubilee, performed by Her Majesty’s Royal Marines Band Portsmouth (Royal Band). They have also recorded ‘Royal Lullaby’, a gift for Prince George as well as ‘Lullaby for Princess Charlotte’. More recently ‘Royal Lullaby – Sing it soft, Sing it Low’ featuring Maria Ostroukhova was recorded and released following the birth of Archie Mountbatten-Windsor. Other single releases include ‘Royal Sapphire’ featuring soprano Emily Haig and ‘Royal Platinum Love Song’, ‘Royal Hollywood Love Song’ and ‘That Is His Story’.

Olga and Joanna are all available for interview for further information please contact Louise Harris on 07980 996318 or email louise@louiseharrispr.co.uk 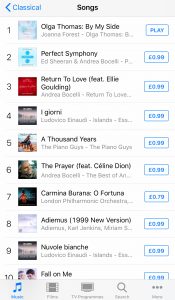 They have over 50 years’ experience reaching over 100,000 each year. They support anyone who has been bereaved wherever or however the death has occurred. Cruse’s services are available over the phone, online and face to face, ensuring that they provide somewhere to turn when someone dies.

All the services are delivered by trained bereavement volunteers through the 79 Areas and Branches and the National Helpline.