The brand new single ‘Flowers On The Doorstep’ is the latest collaboration between Olga Thomas and Joanna Forest, which will be released on Friday 16thOctober 2020. With lyrics written by Adrian Warwick and production by classical star Fabio D’Andrea. The group referred to by OIga as her ‘dream team’ are hoping to repeat the success of their last single together which reached Number One in the iTunes Classical charts, in the process knocking off Ed Sheeran and Andrea Bocelli from the top spot! 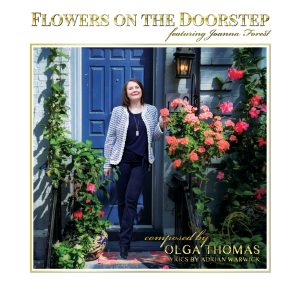 Olga Thomas has had a lifelong admiration and passion for the Royal family. Through her work with Cruse Bereavement Care, Olga has spent a lot of time, energy and creative musical craftsmanship on a unique music programme, a tradition to give their patron, Her Majesty The Queen special gifts of music composed by Olga to commemorate the important events in the life of the Royal Household. This has led to Olga writing and performing many tracks for the Royal Family over the years, alongside her own projects and single and album releases. She has worked with many amazing musicians through her work as a composer, who have all brought their own individual interpretation of her music bringing it to life. These singers include Joanna Forest, Daniel Koek (Les Misérables), Wynne Evans, The Band Of Her Majesty’s Royal Marines Portsmouth (Royal Band), Emily Haig and many more.

Joanna Forest shot to fame in 2017 when she broke records becoming the first independent artist to go straight to Number 1 in the Official Classical Album Charts with a debut album, “Stars Are Rising”. Her 2nd album, “The Rhythm of Life”, released in 2019, also shot straight to the top of the classical charts on release.

Joanna has previously recorded with Olga including a classical Number 1 single with “The Royal Platinum Love Song”, released to celebrate 70 years of marriage between The Queen and Prince Philip, a Top 10 classical Christmas hit, “That is his Story”. Olga and Joanna recently hit the No.1 spot once more in the classical chart with “By My Side’ written to celebrate 60 years of the wonderful work of Cruse Bereavement Care Charity.

Adrian Warwick worked previously with Olga when he co-wrote the lyrics with Grahame Maclean to ‘By My Side’ which reached number 1 in the I Tunes Classical charts knocking off Andrea Bocelli and Ed Sheeran from the top spot.  Adrian is so pleased to once again be working with Olga Thomas and Joanna Forest as part of The Dream Team once again working with the amazing producer Fabio D’Andrea. Adrian continues to write across genres including classical crossover, modern country and ballads.

Olga is delighted to once again join forces with Joanna Forest and lyricist Adrian Warwick on the new single ‘Flowers On The Doorstep’. Joanna’s endearing and pure voice interprets Olga’s very personal composition, which was written to reflect her journey as a young woman travelling from Russia to London some 30 years ago. The feeling of finding a place she felt she finally belonged and could be her true self, her beloved London was the place that embraced and welcomed her, which in turn helped her to develop her creativity and grow wings.

The single was recorded just as lock down started to be lifted in London at The Old Hit Factory. It’s positivity is infectious and it evokes a feeling of a bygone Hollywood film era, evoking memories and feelings of a blissful, calm and happy moment in time. A perfect anecdote of Olga’s story and indeed an escapism of the current World climate.

Olga and Joanna are all available for interview for further information please contact Louise Harris on 07980 996318 or email louise@louiseharrispr.co.uk